Wednesday, June 9th, 2021.
10:55pm This morning I woke up to find out that my PlayStation had been repaired. What he did was replace the dead hard disk with the old one he had in his other broken PS4, the one he'd held on to after he'd fried the board inside it. I had just left the washroom when he was explaining to me how the system was downloading some of my games. The repaired PS4 was back on my desk next to my computer before I was even fully awake. Settings were done and things were reconnected and I was able to do the imaginary racing again. Hours later and I have mixed feelings about whether this was a good thing or not. On the one hand, I really do enjoy playing the game. On the other, I had already been liking the other things I was doing with my time instead when I didn't grip the controller in my hand. I had started reading a book on prose poetry. Watched a movie that stuck to me a bit and that I'm still thinking about. I mean, I was ready to embrace the hashtag notgaminglife. But oh, was I ever quick to establish it back on the desk, to stream some races, to distract myself again. 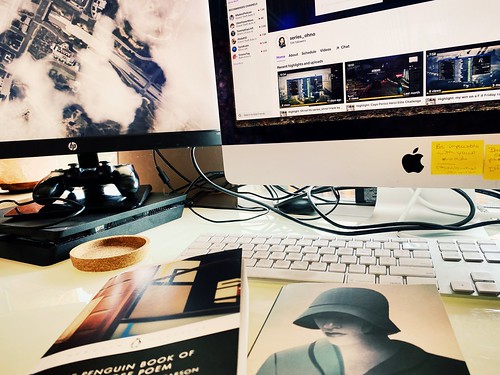 What I need to do is make a time for reading each day. Some part of the day should be for reading. Or the night. Whichever. So far, I've held myself to typing my online journal entries each day this month (save for the one where there was a site outage) and if I can make myself write when I don't even know what it will be about, then I should be able to make myself read a book for an amount of time as well. When though? When do I decide that certain times should be for self-study, reading, learning something, working on a course, etc - and when is the time when I just let myself play the video game and interact with others? Do I do designate certain days for it, like some people I know who do that? Do I take a stance and have days where I keep it turned off? What kind of schedule for gaming should I make where it is enough to keep me active with my streaming and interactive with others, while managing myself?

It's not as if I don't know how to manage my time when I'm on a schedule. I didn't make the Dean's List in the Fall by not prioritizing things, ya know? But now that I'm out of school until the Fall (if that's when I feel ready to return) I am a bit lost as to how to make myself do the things I would prefer to do over the easier things I like. I'm sure I can figure this out. It's about prioritizing the hours of my day for myself alone and that there is the obstacle I made. I have not been good at deciding that I'm deserving of pursuing or giving attention to what is better for me. Take writing, as an example. I'm so often thinking about writing - poems and prose and prose poem things - and journal entries and letters - and of how much I want to improve myself with this, to make it into something more, a body of work maybe someday. But how difficult it is to get myself to do it until I'm actually doing it! It's like falling out of the habit of drinking water. Once I'm used to drinking water, it's easy. When I've stopped doing it, it's a chore. A chore to drink even a glass of it. Even when I know it is good for me and helps me feel better. This is a thing.

This isn't that difficult of a problem to solve. I don't need to have a broken PlayStation in order to make better decisions of how to spend my time and where to direct my time, attention and energy. I'm capable. It's just a matter of making the decisions, following through.

On the game, there is someone who likes to make sure to tell people that I'm married - usually when a guy is flirting with me or has noticed me in a way that provokes this reaction. I've noticed it a few times. First, my husband doesn't need someone coming to his defence as making people know I'm married to him. He's in this same apartment and well aware of what I do and if I'm actually interested in someone, he's made aware of that too. Secondly, our marriage is not that kind of marriage. It's a partnership of necessity for survival at this point between two people who would most likely have remained best friends but as he said years ago, he knows we likely would have broken up if things hadn't happened the way they did. When the marriage became open, it was with the understanding that, because we do love one another and like each other as human beings who have been there for one another, that we won't f the other person over on the way out. But aside from the literal walls (not to the ceiling walls but definitely a physical representation of a barrier between myself and the space he tends to be in) and the damage never repaired long ago - and I'm lost on a tangent.

Basically, no, I'm not out there trying to bait someone or to lead anyone on. If I were to get involved with someone on a romantic, emotionally involved, deep interest level, then the conversation of why things are the way they are and how I am actually loyal and true despite what seems the contradiction from the outsider perspective, well, the person who I next am that vulnerable with my heart with will know. Unfortunately, I have made some mistakes along the way in my longing for a connection but it's all just part of the lessons and learning and reinforcing what I do or don't want and what others might want or not want of me. I wish the married thing wasn't used as a weapon against me. It was a logical, practical decision made at the time. I can't entirely call it a mistake because for both of us, it has us here, alive. It pains me, as someone who loves him as a friend, to know that this can't be the best situation emotionally or physically for him either. I have told him a few times that he deserves to be loved in ways that I have not been able to (due to reasons not posted here) just as much I would like to have my needs met too.

But anyway, it's just this shameful thing that I feel is tossed my way - "she's married!" - as if I would ever deny my marital status or lead someone to believe otherwise if they were actually interested in knowing about me. I also find it icky that the same thing isn't done to men who flirt - the ones in relationships - very rarely do you hear someone interrupt when they receive attention to point out their relationship status like some slap on the wrist, some pull on the chain. I know my situation. I'm aware of it. I discuss it with him. He's aware of where I stand, day to day, who I am. He accepts my wild heart and knows he also isn't the one who can actually hold it - he never could. You can love someone and make decisions that aren't the best long-term but make sense at the time. I also can't deny that he hoped for a long marriage. My hope is that when things eventually are different, that we are able to be happier and to remain loving friends. We are each other's family. That counts for something.

Really, the way the person on the game wants to use it like a cockblock on me, it makes me want to say I am not owned by anyone, I belong to myself, the person who I will give myself to is not the person I am with, don't be judging me for things that you don't know a thing about, ya know?

11:50pm Sure had a lot to say on that but it puts me on the defence. I can't share the whole story. Certainly not as a response in game chat. But I can say, I am forthright and upfront about myself. Recently, much too much in that, and mistakenly, but still, that is part of being me. I'm awkward and I mess up socially because I never had the textbook dating path or courtship. Wait, now I remember some dating in my late '20s before I ended up in Toronto and had some surprising actual dates in my '30s but other than that, my first kiss was at age 17 in my first apartment when I was living on my own and a factory worker. My first time being with a man fully was at age 20 with that Guy who was 15 years older. Sure, I caught up sexually over the years since then and definitely learned a lot about what I do and don't like. But there are still experiences and milestones I have yet to have with someone that I would hope to be romantically involved with.

I guess I hold out hope that I'm not out of time for that yet.
Collapse