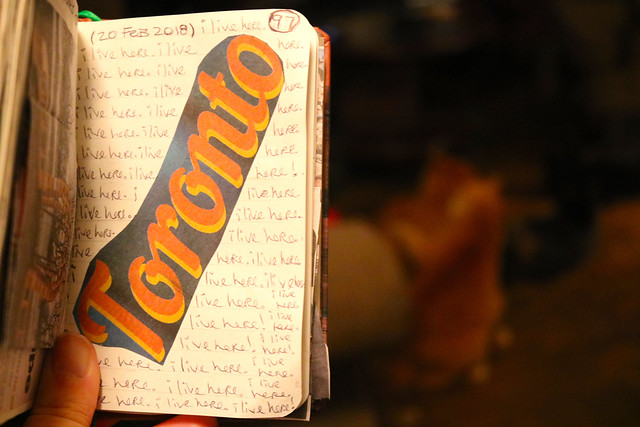 Thursday, February 22nd, 2018.
10:57pm Hi there. It's me. At the time of typing these words, I still exist! No, I haven't been posting to my online journal much at all (not since the start of the month, eh?) but I'm writing in my paper journal more often again. I was hoping to have more consistency with writing over all but this wasn't the month for that this time around and I'm just going to have to be okay with that. We've entered the last week of February and before you know it, March will be here so I may as well start writing now and see if I can get myself into the routine of it before the new month comes around.

As I type this, I can hear the wind outside on the balcony - up here on the 20th floor (or is it the 19th since there isn't a 13th?) - and husband's snoring has phased out for the time being but it might return as he cycles through sleep, we'll see. I'm watching / listening to a vlog on YouTube by Tamara Woods who was live streaming earlier today as a kind of write-in session of sorts. I missed out on it in realtime but I'm able to be there / here right now, after 11 o'clock in the evening EST, typing away on my computer at my desk with the view of the city. It may seem strange to be typing along in silence to someone else who is doing the same (in between time periods of talking - so it's word sprints with bits of chit chat with whoever was watching her live stream vlog) but I think this is almost meditative in a way, and it's helpful, comforting and motivating. I was writing in my paper journal more much of the first hour of her video and I also found that to be good too as I get closer to finishing my current paper journal (number forty-one). Maybe I should do one of these myself? I'm not that comfortable with being in front of the camera but when I am, it'd be kind of neat to be able to make a video that other people can do word sprints with or write in their journals to or whatever creative outlet they're using to get through.

I don't know why I have to be so self-conscious about being on video. Most of my vlogs these days are of things I see but not of me. Simultaneously, I've been participating in the 365 Days (self portrait) Flickr challenge since the first of January but there are many days where I'm just holding something or pointing at something or basically just avoiding actually being in the photo. Trying to deal with my overly critical self-image is exhausting but I'm trying to do what I can. Even now, at this age, trying to get over it. Acceptance should be easier after all these years, you'd think, eh?

11:15pm How am I doing? I must admit that anxiety is quite high and I'm trying to manage the best I can. I'm thankful that we live here and that we have a great view. I'm grateful that the cats are happy. I feel like we're still settling in. Partly to do with how I would like to decorate or add to this apartment to make it feel more comfortable and at home - things like get a different shower curtain and bedspread to putting some kind of organizational shelving into the big closets we have to make them more space efficient and useful. Not long ago, I moved the record player and my vinyl collection to the wall under the painting of Bill Murray in the living room and backed the dining room table into the corner by the balcony doors in the dining room space. It frees up some floor space and works. Led to finally putting something up in the corner there on the wall - a map of Toronto and that one map of Venice we had on the wall of the hallway in our previous apartment, along with a few postcards from the places we traveled to on our big trips years ago. It's made the corner cozier!

11:25pm I'm close to reaching the 750 words goal for today! Day one for a new writing streak, hopefully? I don't want to put any pressure on myself because I've got other things that are pressing in on my brain. I've been trying to get out more, be creative and that sort of thing. Started doing some social media work for someone and it pays nothing but I'm earning a lot in learning, which counts for something. I have an interview next week for a volunteer thing and while I'm not confident about how I'll stand up in that particular field (photography) I know that I have some value to contribute and if I get the chance, I'll give it the best I can. Still looking forward to returning to school but that's a few months away before that term begins. We should financially be doing better and the weather will be nicer too. Wish I hadn't lost that rhythm I had going but if I had it once, I'll find it again.

I love this city. I see the lake and the sky and the lights at night. I'm in awe when a heavy mist or fog rolls in and I see nothing. I think how this time last year, I didn't know I'd be here before my birthday last year, let alone this next one. Not everything is easy but yes, everything is worth it.

11:37pm The wind whips like it did around the old farmhouse I lived in when I was a teenager. It's just the way the gap is at the door - if I open the balcony slightly more, it won't make that sound - or if I close it tighter, so.
Collapse