Wednesday, October 26th, 2016.
1:17am I was about to go to bed when I thought I'd check to see if the vacation time set for 750 words was over with today - and so it is! I'm not sure how I'll do with writing again, like this, for my online journal, in this way. I've managed to continue with my paper journal but I've kept my standards low for it, given that the amount of time and attention I could give to it would vary depending on how I was feeling that day or what was going on. That time I tried to write an entry the evening on the same day of the abdominal hysterectomy surgery is quite the thing! I was able to text during moments of coherency but that's only because of auto correct and the fact that you don't totally have to be able to write a straight line - just type and hit send - even that was a challenge at times, though overall so much easier than trying to write in my paper journal. 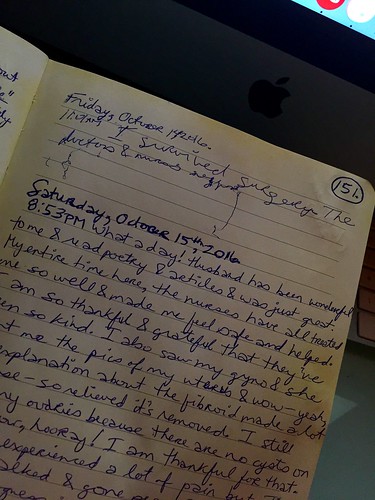 1:22am I had a shower yesterday and this one freaked me out more than the first one I had after I was home a few days. This one had me feeling strangely because I didn't have a bandage on during it and I'd already seen a bit of infection type looking fluids on the changed bandage that came off prior to the shower. Then, afterward, when husband was helping out by putting a fresh one on and we patted dry the area first, it seems that it's still having some come from the wound. It's nothing very apparent but it alarms me a little. I realize this means that my guts aren't going to fall out of me but it's still scary. I have my first follow-up appointment with the gyno soon after November begins which is only a few days away. So long as nothing too alarming occurs, I'm sure it can wait. It's not fun though. The great thing about showering (aside from washing up) is the way my hair feels and smells afterward. I'm thankful that it's growing so well. I'm long past due for a proper haircut or trim or style or something of that kind but I'm going to wait awhile longer until I get a bit more length and feel more comfortable about having it done. It's a good length for me right now. As for weight, I don't know if I've lost anything yet. I know that I likely did while in the hospital but then when I got home, husband was cooking a bit there and I felt like I was eating a lot. I don't think I'm eating as much as I did before but I cut my water intake back from when I was in the hospital. I'll fix that starting today, after I've had a night's sleep. I'll switch between cold water and hot herbal tea throughout the day. 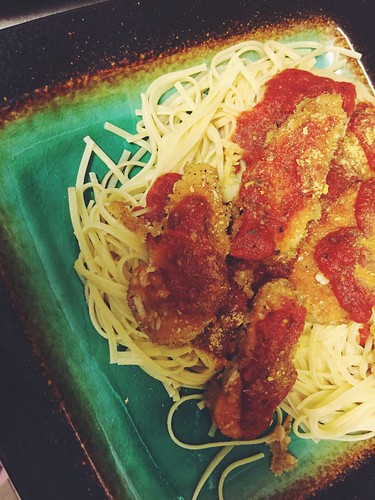 1:34am There was a walk I took with husband to a nearby park the other day and it rained on our way back but it was refreshing to me and I liked the way the photos turned out, with the way the autumn leaves looked. I wanted very much to see more of autumn before it all changes and I know that I won't be able to go on any bike rides anytime soon and the length of time it would take to walk to someplace to take good photos of some changed trees, I'd not be able to walk back. I have to build up to that and I'm supposed to be resting more. I overdid it a few times, pulled some stomach muscles getting in and out of bed when I didn't do things the right way, and I've done some other actions that I probably shouldn't have already. The thing is, despite the pain from the surgery, I must have been in a lot more pain that I had become to accustomed to from the fundal fibroid (benign tumour but still unpleasant) because I found myself able to bend down easier - though I shouldn't have been doing that so soon afterward, even if it was less painful than before. Anyway, yes, it feels strange still - showering without the bandage felt super weird - and going for the longer walk made my body feel strange and not caught up with itself - but I know that is just part of the adjustment and process. 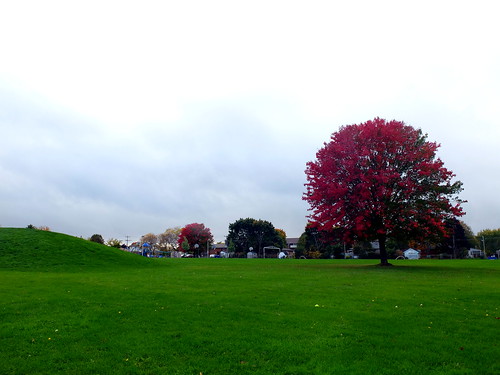 I have to remind myself that I'm early on with the full recovery time for abdominal surgery.

1:50am Went past the 750 words required and I feel like typing even though I really should get myself into bed, to rest and sleep.

Thought I'd update about some other things while I felt like writing.

* A few days ago, I had husband move my computer, desk and comfy chair back into the book room. This meant doing some rearranging - one of the cat towers is back in the living room near the window and our kitties love it just fine. One of the outside comfy chairs is back indoors and in cassette corner now, though a cat (or two) is usually sleeping on it much of the time. This rearrangement comes at a good time because I want to be ready for NaNoWriMo (begins November 1st) and it just feels better to be back in the book room again. Now that it's cooler temperatures again, I don't need to have my computer next to the air conditioner anymore.

* I was going to share several things with the bullet point method and then exhaustion hit me. I still have to go to the washroom and then I'm for certain going to bed. I'll try this later. There was more I wanted to say. 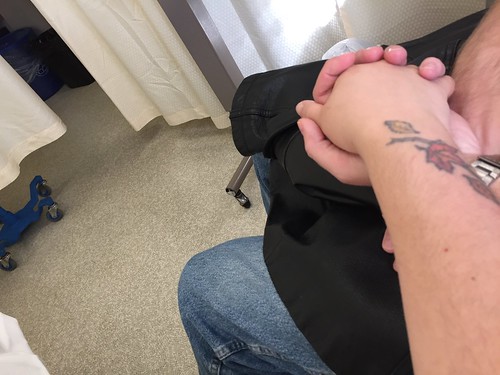 [Link] An updated video of my blank journals! Almost finished paper journal #38 - which one should I write in next?
Collapse