We went for a stroll through Optimist Park near sundown and I took a lot of photos. 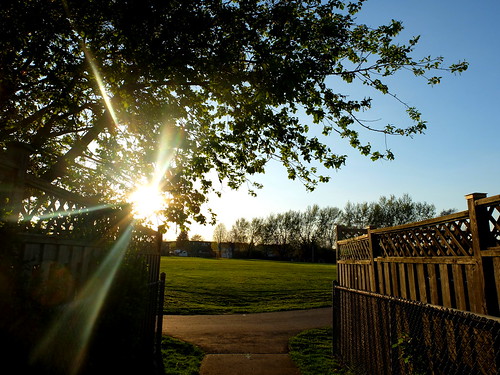 Thursday, May 12th, 2016.
12:44am So much for daily writing, eh? I have a good excuse / reason for this recent fall off the map though. I had mentioned in a previous entry how another breast cyst had flared up and that I had started bleeding (the last one especially annoying since I have the mirena i.u.d. and I'm not supposed to go through that anymore - and haven't since the early days of having it put in) but as to what happened last week, I got sick.

The night that I let my writing streak go to the wayside was when I was experiencing a lot of pain with the cyst. It was quite large and it hurt like heck. This is not too long after I had that previous one that wouldn't heal properly and required antibiotics and stitches and so on - but this one, fingers crossed, wasn't going to be as bad because it was located in a more breathable location of my breast. Still, it was not draining and it had a large area of redness. I was in a lot of pain from it. I believe I may have got a fever from it because I think I felt the fever break the next day. The night before was bad enough that we were discussing whether I should go see the doctor or emerge to get it drained. I held off because of the hassle of it. Bleeding alongside with it made it apparent this was a hormonal thing and it was upsetting enough that this was going on. At the same time, I thought that it was likely to run its course.

I wanted to keep my writing going but any attempts to try and write / type were painful. I figured I would try again another time. I had to get some rest.

The next day, while washing the dishes, I received a text message. This made me step back from the counter and that's when I noticed blood on it. The cyst had finally started to drain. What a relief it was, even if icky. I finished the dishes and then took care of the cleaning and bandaging. The infection cleared up over the next few days and while it is still healing, it isn't a complicated nightmare like the last bad one.

On Sunday the 8th, husband and I adopted two more shelter cats that I'd seen through my Facebook feed. Two kittens that are about five weeks old. My Aunt Terry helped out by driving husband to the vet for their first appointment. They're healthy and are started on their round of deworming medication. Since they are so young, they won't receive shots or be fixed for a few months yet but we'll be sure to have all of that done as soon as it's allowed. We want them to be healthy and for the household to be harmonious. 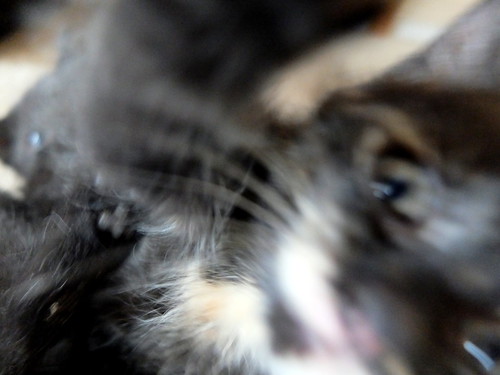 The kittens are named Smudge and Chai. They actually are siblings - both girls - and they're pretty gosh darn adorable. Vincent and Pekoe, as of yesterday, both have adjusted well to them. Vincent took longer to come around but he's accepting of it now. A lot of that has to do with how we've interacted with them and made sure to be inclusive, to give extra attention and to have an encouraging and affectionate tone. Even with the initial hissing, I didn't give the big cats heck for that - just reassurance and made sure that no one would get hurt. The kittens really are too young to have been taken from their mother but they're doing really well.

So, on the evening of having the cats (Mother's Day), I had a nap because I felt exhausted from everything. I woke up with lots of blood and it was back to the excessive bleeding that I hadn't experienced since before the mirena device was inserted. This scared the heck out of me. The timing of it sucked. I didn't know what I was going to do, what with husband working overtime and being gone all day and the fact of life being that I don't have any friends nearby who could watch over things for me if I was to go to the hospital. I stayed home and went through a day of worry and flashbacks to "the bleeding times" but now it's to a manageable level, although again, I shouldn't be going through this at all. I know that I need to follow up with the gyno because there is clearly something not right. Either the device has moved or is no longer releasing the stuff that was to keep me from going through this --- given that I have this thing in me to stop me from having to get multiple blood transfusions, it was never meant to be a long-term solution but I thought I would at least get the five years out of it - apparently not. I've not made an appointment yet but I will. One thing that stops me is that I have yet to lose the weight to get the hysterectomy. I think I'm going to have to get the surgery regardless. Which brings me back to my concern about not being home to take care of things.

I can't put this off but I have for the past few days. Once things calmed down (flow-wise) I have been busy with the cats and becoming more active to help out and move my body. I'm trying to do more, at least. The first day or so, I didn't sleep hardly at all because I didn't want the cats to be unsupervised. Things are much better now.

On Tuesday (the 10th), my college courses opened up / officially began. I'm keeping track of when I work on the courses and which ones I do on a planning schedule sheet. It's helpful to know what I've done since I'm in three different courses and to make sure I keep on track. I love learning and it's fascinating so far. Lots to learn so far as the various online learning platforms go for college but it's awesome. Only thing I wish is that I'd done this sooner. If I'd started even three years ago when my claim was settled, if I'd known this was an actual attainable thing to attempt, I would be so much further along!

But then I think of the great things we've experienced - traveling overseas and significant life lessons - and I think that I've probably come to this at the time I was supposed to, maybe? Much like becoming vegan - another path I wish I had taken sooner - but better now than never, eh? I feel good about these choices. I think I'm finally starting to take better care of myself, or trying.

Yesterday was a productive day for me. I bathed, vacuumed the carpet, washed the dishes and went for a walk with husband in the evening to a nearby park where I took a lot of photos and saw the sun going down. It was good to get outside and was the first time I'd been out in weeks. Yes, weeks. I could see the budding of the leaves on the trees outside the book room window and when I'd stand out on the balcony and look down, the blossoming of a tree below - and I yearned to be out there. I wasn't feeling well for several days though, so there's that. I was feeling antsy by the time we did get out. I look at my bicycle on the balcony and think of how I so badly want to go for a ride about town and go exploring and taking photos. I can finally wear a bra again without pain so if I am on the mend again, I hope I get out there and do that. 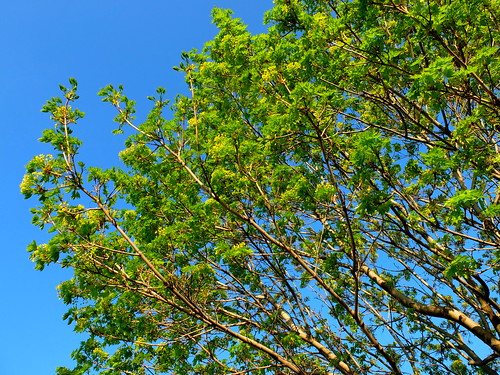 I've typed all these words after not writing much at all lately. I'm not sure if I'll be back to writing daily but I'd like it if I would. I would hold myself to it but it'd be nice if I would write more often.

To those who have stuck around as I try to figure out what to share, what to keep to myself and how to move forward with the inevitable moving forwardness of life - thank you for being here.

P.S. Mother's Day was only tolerable this year because of the kittens.

P.P.S. Globally Local has meal kits and husband and I have eaten incredibly satisfying and delicious food because of them. Worth it.
Collapse