Monday, September 15th, 2014.
5:30pm This is the earliest I've tried to type an entry in a long time and what if this makes it even harder to write? I seem to start these posts with my worry about writing. I honestly shouldn't care because I'm doing this for myself, my so-called audience is very small and the whole point is to write 750 words every day this month. Ideally, I would carry on with the challenge next month and the month after that and the month after that - I mean, that's what writers do, right? (write!)

11:00pm Woke up this morning in a lot of pain. My shoulder. Terrible pain. It made me nauseous. I went back to bed and after sleeping some more, I felt a little less sore. The body requires time and rest to repair. I have the luxury, I suppose, of being able to give myself that. I'm not entirely feeling so hot. I crashed later in the afternoon and had some more nightmares. I should be writing these down or making voice posts immediately after waking because by the time I've gone to the washroom and such, I'm left with a tiny glimpse, like taking a look into a keyhole and seeing the end of it become obscure and far away.

The nearest to waking I am, the more distance between the bulk of the dream, the main action, the storylines, the nightmare and myself. As though I have traveled and the closer I get to waking up, to getting HERE, the further I am from wherever I went to in my sleep. So the last act of the dream I remember from this morning I knew had nothing definitively to do with the rest of the dream. It was disconnected from anything else that had happened prior to it. I remember the following only because I mentioned it to my husband when I walked out into the living room and I think I told him before I went to the washroom.

The setting was supposed to be an apartment building. Worn down. Maybe it was supposed to be like where I lived in The Beaches but I think my dream was influenced more by the kind of buildings where people rent a room by the month and share bathrooms down the hall, where the rooms are small and everything & everyone about the place is neglected. What happened at the end of the dream was so weird but I could understand what I was sorta telling myself. See, in it, I suddenly met the neighbour next to what was supposed to be where we were living. They were a family (though the kids weren't with them, I knew they were a family and they're two people I've seen on my Facebook who did the ice bucket challenge, one of whom I went to school with long ago) and there they were, as viewed from the doorway, in this really cramped messy room of a place. (Unlike the bachelor apartment I had in real life which was more spacious, better laid out with a distinctive hallway that led to my living space, full washroom tucked away through another hallway and a separate section for the kitchen - great for me!)

But yes, back to the dream, I felt so bad for this couple. I mean, they were miserable! (In real life, I believe they are doing very well, live in a big house on a large property and would never live in the conditions I dreamed them into.) But I remember saying to them, "don't be sad! You live in the freakin' Beaches! You're right up the street from the lake & the boardwalk! You have the streetcar on Queen at your corner! You live in an amazing city! Enjoy it! Get out there and explore! You'll love it!" and then before I woke up, I slipped all my unused Starbucks gift cards under the door for them to use, to get them out there and also because I couldn't use them anymore.

That's another place where the dream had no logic. Our apartment was next to theirs which would have meant we lived in Toronto too, right? But no, I knew we were in St. Thomas and we don't have a Starbucks here (and I actually do have an accumulation of unused Starbucks gift cards in my wallet that I can't use at the moment) and that's why I wanted to give them away, to cheer them up and so they'd get some use. Also, when I lived there, it helped me, what with my anxiety, to have the Starbucks to go to on Queen Street and a nice time was taking a detour stroll down to the lake to take the long way home.

I've made my 750 words for today but I don't want to stop writing yet. 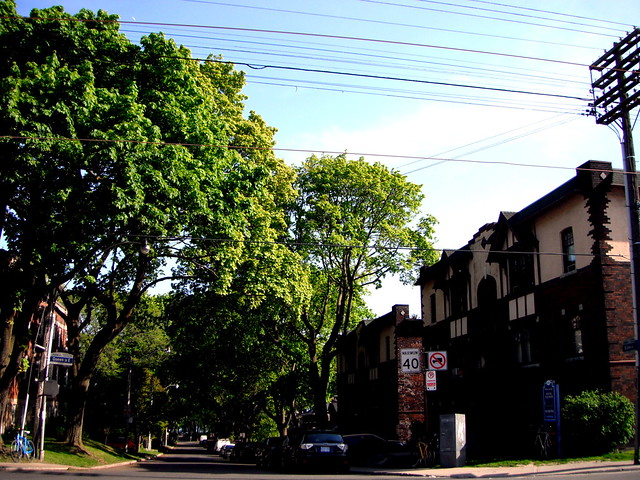 Confession: While writing this, I looked up the apartments I lived at, now under different ownership but they have the same guy as building manager. The cost for the bachelor apartment that is available is $100 dollars more than what I paid when I moved there in 2009. Honestly, that's not too bad. I could afford it if I was on my own. Yes, of course I think of it. Especially when the moon is full. I get a yearning and a hurting so bad when I'm feeling emotionally thrashed.

But this is where I am now. There is also that marriage thing and taking into consideration what is best for us as a couple at this time. We've got a comfortable apartment here. We're addressing health issues, both physical and mental (with dental work approaching us on the horizon, oh boy!) and this is where we should probably stay until we get the feeling otherwise. If anything, we'll likely make this place even more "ours" by furnishing it with things that are "us" and taking advantage of the fact we can live more comfortably for less in this town, even with an unimpressive combined income. We'll be a 100% debt free couple with savings in our bank accounts. That's a hard thing to do in these difficult economic times, ya know?

I'm not giving away my Starbucks cards even if I have to wait awhile to use them but I am wondering when I'll stop going on & on about how amazing it was to be there as opposed to here. There are always better places than where you are right now, no matter where you are (and worse places - far worse places!) so I need to tell myself to get over it.

Maybe giving those Starbucks cards away in the dream was symbolic of me not only trying to be nice to that out of place couple but of me letting go of something that I strongly tied to my Toronto experience. I was a gold level member and I know it makes me sound like a douchebag but I admittedly tied some of my self-esteem to being able to maintain that with my Starbucks card. Now I'm living in this Tim Hortons town and I lost my gold level the first year after moving here. It wasn't so much about the status but about how I had it interlaced with being in Toronto, of being able to have experiences I could never have in the smaller towns I lived in before. It was about the possibilities and potential that was waiting outside my door - all I had to do was carry my card with me and get myself out that door. It was about more than a coffeeshop chain. It was about The Big City. 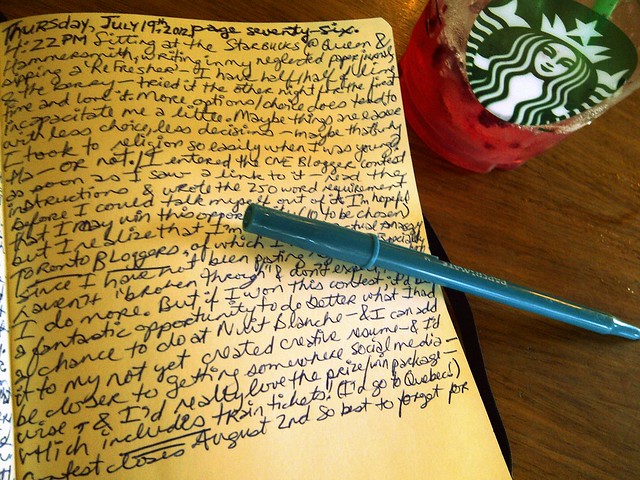