There is a letter on my desk that I want to reply to but I haven't been in a mindset for writing lately and I feel like I should be in a good one when I set my pen to paper for my response. I want the mood to be right (my mood, mostly) and to be able to focus on it entirely. Letter writing, like the time I have put into scribbling on postcards over the years, is precious to me. 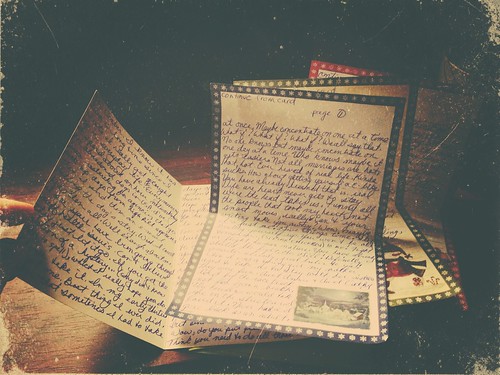 I wish I had not fallen out of the habit of writing letters. It was a healthy outlet of expression, one that I miss as I've been feeling overwhelmed and unable to write much. Behind me, on a shelf, there is a backlog of letters and notes from more recent years (friends & acquaintances through the internet) that I have neglected to answer for one reason or another. It makes me feel terribly guilty, especially since I never intended to not write back. I wonder, with some of them, if they even live at the same address anymore. I know of at least one person who actually has moved since they sent me a long beautiful letter - one that I very much appreciate but have yet to reciprocate.

Reciprocation is important with letter writing. It can make the difference between having a meaningful connection or breaking one. For the longest time, spanning several years when I was younger, I had a lengthy correspondence with a friend from high school. It even carried forward (resparked) in my twenties and it was an amazing communication. I have those letters and they fill several folders, ordered by date, from handwritten to printed out computer fonts - they're an irreplaceable record of a friendship that I wish I had never neglected. Even though the reason why we're no longer friends is not because I didn't reply back to a letter, I think that, in a way, it started with that. I didn't put the time into returning the effort or value into the relationship as I should. One day, when I can look at them, I will feel very thankful that I held on to those incredible letters.

I have other letters from pen pals in folders alongside those ones. When I moved away from St. Thomas in my grade nine year, I was able to pick up a few pen pals amongst my friends and acquaintances. Those letters meant so much to me, especially having moved to the middle of nowhere - an old farmhouse with a corn field on one side and a bean field on the other, a pig farm run by the landlord out back. Seeing the flag up on the mailbox attached to the tree in the driveway was one of the best feelings ever, especially when I knew a letter was there for me. At one point, I was sending out so many letters and receiving several back that it was a guarantee that someone would have written me. With snail mail, the more you send out, the more you receive. Like love, I suppose.

In my first long-term relationship, love letters played a key role in developing closeness and bonding us through the long-distance. We had met online (AOL, 1998) and although it was our main communication tool and we also spoke over the phone, letters became the best way to keep the romance and connection strong. It didn't hurt that he had beautiful handwriting, either. I loved how we shared ourselves in that way and I have not had a relationship since where letter writing played such a role. Reader, I burned those letters. All those letters he sent me, the photographs taken during our several years together - all of it was burned to ashes. I felt such a strong pull of negativity from the relationship and I wanted to move on, I needed to let go. Yet, who I was and how I was loved through my first love's eyes were written across those pages. I may have overdone it because now, having distanced myself so much from that time period and that relationship in my life, I think one day it would have been nice to have those letters for posterity. Maybe I feel that way because the power they had over me is gone now? Would that be so if I hadn't burned them? I don't know. As other writers and lovers have known, there are times when one must burn the letters. 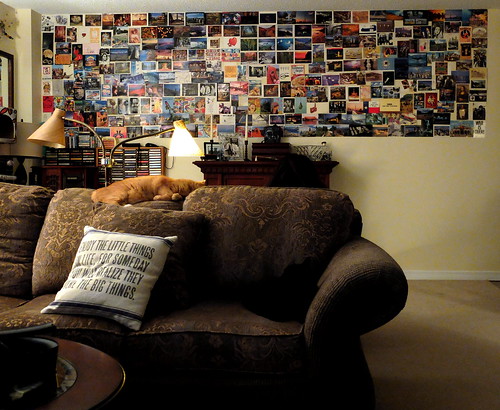 For several years I was able to exchange postcards (mainly through a couple of LJ communities) and I wrote hundreds (if not more!) and received likewise in return. It was a fantastic way to continue the art of letter writing, to pack it onto a postcard - which I do, in a very scrawly cover every bit of space way that those who have received postcards from me would know so well. One of the best things I love about postcards is that they make for a wonderful mural. I put the scotch tape on places where there isn't any writing and then I get a tall person to help me arrange them on the wall. It was a great way to cheer up my bachelor apartment in Toronto and when we relocated to this apartment in St. Thomas, we assembled a postcard wall yet again. If I turn around from where I'm sitting in my book room, I can see it at the back of our large living room. Anywhere I live from now on, I think I should like to always put up a postcard wall. What makes it even more special to me is to know that among the postcards from trades are also personal ones from friends over the years. Postcard writing and trading is something I would like to get back into again once I feel more settled and ready to write regularly.

Why do I love handwritten letters, postcards and writing notes in paper journals & such? The tangibility of it. While many of us would not even know one another these days if it wasn't for the internet, email and Facebook messages are the main way people correspond now. There are vlogs, skype and let's not forget twitter and our other social media means of communication and so much as all these things have brought us together or keep us in contact - nothing for me beats the handwritten letter, the scrawled postcard, the printed word on paper. It feels so much more personal, more real, more significant. Even if the person is a stranger from the other side of the world, the fact they took a moment to write on a postcard or send a pen pal letter to share who they are, to let you peek in on their life, that's simply amazing to me. The canceled stamp. The postmark. The date on the letter. Your own name written in someone else's hand. You exist and they exist and in that moment, you both have made yourselves immortal. Okay, perhaps that's a bit over the top, but it can feel that way - especially when you're looking back at letters from your childhood or any relationship from so long ago you barely remember who you were back then. 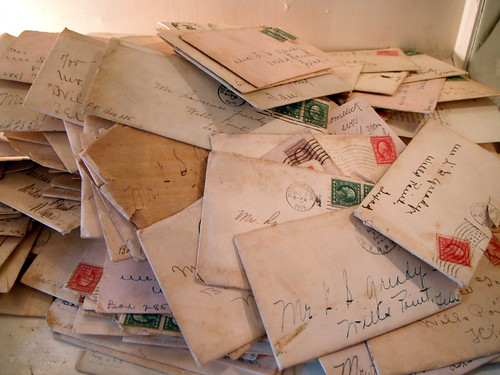 Another thing that has gone by the wayside but was a tradition in most all families was the exchange of cards on holidays, especially Christmas. Christmas cards were a good way for people to send Season's Greetings, to reach out to friends & family, to remind them that you still exist and that you were thinking of them. For those who had closer ties, it was an opportunity to include a note or letter about how your family was doing, what the latest news was, to wish the best, to encourage a visit or to remind the person to keep in touch. Christmas cards could also be a bit competitive - who could accumulate the most? - but that also depended on how many you sent out, too. This recent Christmas, I sent out a small number of cards (ran out of stamps before I could get to anyone else and the postal rate was going up and I wasn't prepared and other excuses!) but I believe I'll try again this coming year to send out Christmas cards to family, friends and internet friends (who feel comfortable giving their addresses when the time comes) to let them know they are important to me, that I think of them In Real Life, too. Sharing gifs and status updates on Facebook for the holidays doesn't do it for me the same way a personal card does. I hope that people return to taking some time away from their computers & such to write a note or fill out a card (make a card!) and send to the people they care about because it feels way more special than a Facebook status. 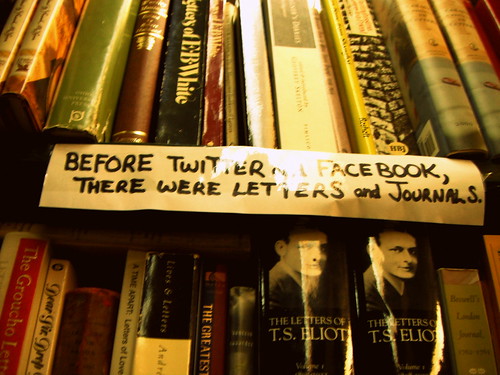 In my collection of books, I have several books of letters. Some are a collection by one writer to various people while other books share back & forth correspondence. There are also themed books such as war letters (those can be particularly moving) and I enjoy compilated books as well which can include notes, letters, postcards and the like. Something fascinating about reading letters written by someone else for someone else. Insightful and touching. Much like diaries and journals, they give us a chance to see life through someone else's perspective and experiences. Often, it's the little details, the mundane day to day, where you can learn so much about yourself and other people, where you can feel the thread of humanity - a thin line like the ink scrawl of a fine pen. 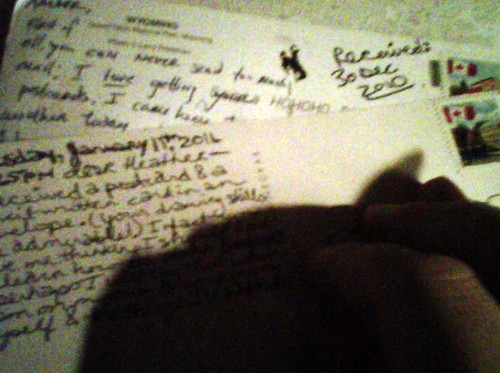 This stays in my mind from one of the books I had read - it was one of the published journals, I believe, but I can't remember which exactly - where I got the impression that at one time, letter writing was a near-daily thing. It was a scheduled part of the day where one devoted time just for that. Not only for business but for pleasure, for keeping personal ties strong, for reaching out to those far away. Yes, the distance has become smaller with the phone and now the internet, but it almost feels like we're further apart than ever from one another with all of this technology. Even if it's sparse, I think the value of a handwritten note, a letter, a postcard, a holiday card - I think even one sent out to someone you care about - that gesture is a gift, a priceless gift.

I'm a sentimental fool underneath accumulated layers of a battered heart, this guarded self, surrounded by all my technological toys of communication. I haven't been able to write in ages it feels like (it's only been a few days) and I felt this pain in not being able to express myself online with a blog post. But it's nothing compared to how I feel when I glance over at my neglected paper journal, pile of blank postcards, the patient pile of snail mail that awaits reply.

Writing this makes me feel connected and relevant. A statement that I exist and that I am here. Sending out a physical letter or scrawled wall-to-wall postcard says that and more - it acknowledges the existence of another, too.

My hope is that I will make time to write and
for all the times when I have set down my pen,
that I will eventually pick it up again.


~
This post is for the Blogging from A to Z April Challenge.
Collapse