Thursday, March 20th, 2014.
10:55pm Phew! So here I am, one hour left in the day to write my 750 words. Only I'm not in this month's challenge anymore. I had only a few days left in the month when yesterday took me down and out of the game. In the morning I was a disaster. I kept setting alarms and resetting them so that I could get more sleep. I was so exhausted from all of the bleeding, ya know? I was a mess. I called the contact for group therapy and said I wouldn't be able to make the session that day (Wednesday) but I knew I had to keep the appointment with the psychiatrist that afternoon. I had intended to ask him about my diagnosis, where I was on charts when he last evaluated me, what I was dealing with, ya know? I also wanted to talk to him about the nightmares. I forgot to talk to him about both, given the state I was in.

It used to be that I used my dreams - which have most always been nightmares - I used them and wrote them down and could handle them. Sometimes I thought of it as dreamwork. I'd see things I needed to learn, what I was processing, a hint into the deeper life. I'd work through things, scary as it might be. I'd even gain insight into things that hadn't happened yet, though I suppose a part of me could see the pattern of what was to come. Dreams added a lot of depth to my creative life and I have carried them well enough all these years. But lately, in recent months or who knows how long, the nightmares attack me. I'm scared. Even if I gain some amount of lucidity in them, it's only enough to wake myself up, not change anything like I used to years before. I wake up with the fear. I don't get the opportunity to write them down or type them out because I'm in the washroom first thing and by the time I'm through with that, I'm left mostly with the aftershock, but no concrete thoughts. I can't write them down after that. These nightmares are hitting me whether I'm sleeping at night, crashing during the day, sleeping numerous times at any time. I can't handle my nightmares the way I could before.

Something we briefly touched on in that appointment was the fact my stress is likely up due to being out in the world again - something that, in my isolation, can be overwhelming. Going to group on a weekly basis is a big deal for me. Then, add the distress of my physical health and it's a bit much. I'm going to get through this. Wish I could have spoken with the psychiatrist about that - he asked if I was still journaling and I said yes but that was unrelated (it really is a useful tool, to write, for anyone!) but could still be helpful. I'll try to see what I can do with this so I'm not so afraid. Nightmares can bring to surface a lot of interesting things but I'm not of the strength to look at everything just now.

Speaking of strength, yesterday I had very little. I was doing better than the day before because, TIMING, I was bleeding less on Wednesday for the first time since Sunday, March 9th. The psychiatrist could see that I looked unwell and our meeting was short. Since, at this time, the new mental health facilities are temporarily located in the same building as the actual General hospital, I made my way to emergency. I went to the wrong place though. There was a patient registration but it was for something else? I had taken a number and sat down, waited for my number and then was told I was in the wrong place. That I'd have to go down the hall to the end there, turn down that hall to the end and then turn once more. Or something like that. Either way, with the way I was feeling - well, I was asked if I wanted to be escorted in a wheelchair but I said no, thank you. I felt silly enough and knew I'd be going to emerge only to wait for who knows how long and no, I'd be okay.

They have you see a triage nurse and vitals are taken, some brief information about why you're there and such, and then you go over to patient registration (for emergency) where you get the wristbands before you're told to go take a seat. I came prepared for this. The previous days had not gone well for me and I figured I was probably in trouble with my blood levels.

I had a book with me and started to read 'Big Sur' by Jack Kerouac. I was instantly reminded how much I love his writing style though I felt sad knowing this book was published a few years before he'd be gone. Oh the drink, the way it took him. Abdominal hemorrhage. How he drank himself to death. Alcoholism is not something I am unfamiliar with, though I have thankfully not battled that demon myself. But to think of all the beautiful things that some writers and musicians have left for us while they left us too soon. The open ended question of what else they might have done if they had only lived longer - but what is done is done.

Eventually, I was called to get my blood taken. This would mean another hour or more of waiting for the results (I first went down to emerge by at least 2pm or so) and I went back to the waiting room. When I was finally called back to be seen by the doctor, a nurse told me that my hemoglobin was down to 64 or something like that. (I think I was in the 50's when I had the blood transfusion back in 2011 in Toronto) and she said they would be giving me a transfusion today. The doctor came in and said they usually don't give transfusions to people so young (WHY THANK YOU! At 35, this is the first time in a long while where anyone has referred to me as young - it was much appreciated, ha!) but they'd be giving me two bags of blood.

The doctor was in touch with my gyno and blah blah blah, I'm on a prescription, which I started today. It's an expensive one and even with 80% coverage under my husband's drug plan, it still cost over $30 bucks. Apparently, it won't even be effective until into the second month of taking it! I'm taking 2 big pills 3 times a day. It's usually used for hemophilia and other things. I'll be following up with the gyno and even though he's still not going to perform a hysterectomy on me at this time because of my weight, one of the options is to burn my uterus lining. Okay. Not a long-term solution (especially given my history) but if it will work for awhile, that could make a big difference in my quality of life. I'm also going to see Dr. G (my GP) next week. Their office called me this morning, concerned about me and wondering how I was after the blood transfusion. 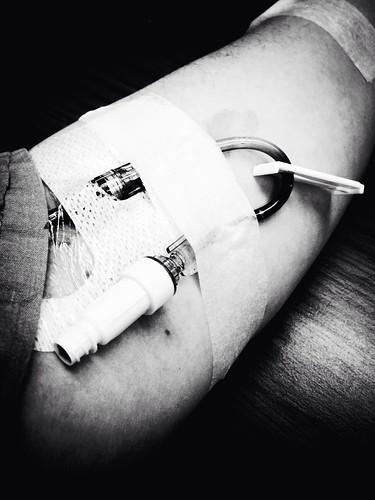 It took hours for the blood to arrive. I'm O Positive. The only part that hurt was initially trying to put the IV catheter in. Because my blood was so low, it was kind of tricky. The first nurse has over 25 years experience with it and she tried twice, both hands. It was painful. She was sorry she couldn't do it and so was I. A warm pack of something, like a plastic little blanket, was put over my forearms and hands to bring the veins to surface and warm me up. The nurse told me she'd be sending a different nurse in to do the IV and that it would be no problem. She said she only tries twice! Probably for the best, too. By the time the second nurse came in and tried on my arm, it was quick and painless. After that, it was a few more hours of waiting for the blood. 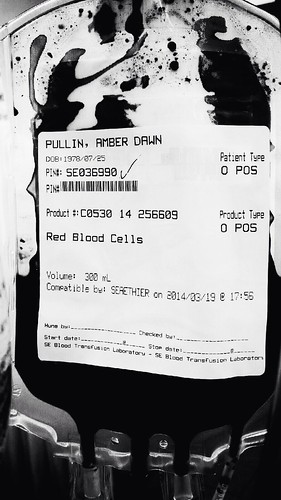 The blood transfusion started a couple minutes before 8pm. 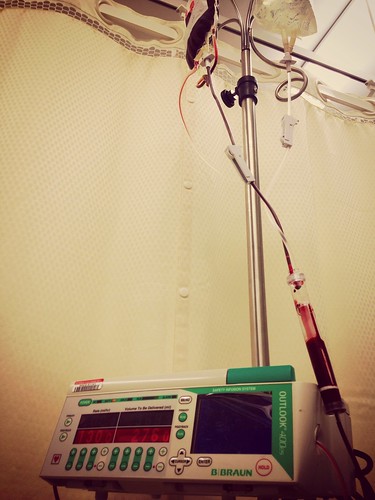 We finished the transfusion of two bags of blood just before 1am.

Took a cab home. It wasn't like the last time, back in 2011, when I practically danced down University Avenue after the blood transfusion I received there. I felt reinvigorated! It was incredible. But back then, I wasn't bleeding like I am now. And I received more blood at that time as well. Honestly, this time I felt guilty, as though whatever I was receiving was just going to be bled out of me anyway. A nurse (I went through several nurses as the shifts changed) explained to me that was it like putting gas in the tank - and though I wasn't going to be topped up, I was getting some to bring me up a bit. She speculated that I likely might need another one in a few weeks but the hope is that the medication will help get me through that and I won't need one.

I am not heavy breathing as bad and my fingers are not as cold although I still feel a bit strange at the tips of them. I slept a lot today and I cramped a whole heck of a lot but that was probably because of the transfusion, which I was told might happen because my body would try to do some clotting down there or something. I don't feel that well but if I still feel this crappy, then it's a really good thing I went to emerge and got that transfusion.

Another difference between the last time I received blood and this time is that I weighed less back then. Between that and the bleeding continuing, maybe that's why I'm not feeling much different after the transfusion.

That being said, I am very grateful. I had a moment there, as the first drips of blood started making their way down the line toward my veins, of feeling extremely thankful to those who have donated their blood. My life was being saved. Some people, whoever they are, were saving my life and they didn't even know me. I know of someone I used to work with in the factory who has been a blood donor over 100 times and it's people like him that are heroes. So, if you, reading this, are a blood donor, thank you. Please know that it means a lot to those who receive it. I nearly started crying as th transfusion began because I know what it means. I know what that it was to save me. Again, thank you.

Yesterday I didn't make my word count but I had a good excuse. Tuesday night I wrote an entry that was my word count and double that. Tonight I've done the same again. Even if I'm out of the running for this month's challenge, I've exceeded my word count goal. That's pretty awesome.

To turn a completely different corner, I wanted to mention that I did manage to read all of the entries this week for LJ Idol and I cast my votes in time before the deadline. The Week 2 Topic has been posted and I will be writing.

Aside from blood transfusions, writing has saved my life - and I am grateful.
Collapse