Earlier in the dream I was packing a bin of parts, one of the smaller brakeline parts, and it was about packing them properly to fit the bags of parts in the piled up rows. There was something else going on in the dream, something between me and the other characters. Later, I'm in the office, only in a room off to the side (not really like the office I remember but whatever) and I'm wanting to discuss something passionately with a Union rep, another co-worker, someone! I know this conversation carried on into the lunchroom and back on to "the floor" (the production area) and it had something to do with making sure we were covered somehow. Some benefits or some particular pay? Education? I can't remember what any of it was now but all I know is everyone thought I was being ridiculous but I felt certain that what I had in mind would be helpful to all of us in the long run. I think I had the insight that I have now after having gone through everything but it wasn't believed. (Who could believe all the years I'd have to deal with w.s.i.b. when I started out as a factory girl all that time ago?)

Back on to the floor but first through the ladies locker room, pushed through into the small bathroom and then back on to the floor. I was put on a bender (machine) and fed the brakelines into it while someone else packed the parts into a bin at the back. This usually wouldn't happen because one person could feed the machine and pack but they were starting me off light.

I looked at my hands and I wasn't wearing the gloves that I had to the last several years I worked there. My hands were going to rash out (& bleed) for sure, likely before the end of the day. I knew what was going to happen, working with those materials, what had always happened. But I also wanted to keep working. I wanted to keep the job. I was back to work in the factory and they paid good money. I had benefits. Possibilities. Couldn't they come up with a better plan, w.s.i.b. and the factory? Could they hire me back and just have it be like it was, only compensate me for the time I would need off to heal when my skin would get bad? Couldn't we do it that way?

This is what I was thinking as I was waking up. I was thinking about this very thing, even as I got up to go to the washroom. I was trying to reason with them / myself about a better way this could have been handled. Now, reasonably, I likely could not have been kept in the factory like that (even though that happened to me for about 6 years - off work, back to work, off work, back to work) but it seems unfair that the end result would be me not able to ever get a job that pays that amount or has that level of stability ever again.

It seems really unfair to me that I should have to go through so much because of that job. I was just a twenty-something year old factory worker. I had a job and passions and now I have neither.

And the factory was so vivid, even though I know it's changed a lot most likely since I was last there. It was very real. The fittings on the brakelines, the titeflex, the feeder for the bender, the way the parts had to be slid in correctly so that it would run through the machine properly. The colour of the painted cement floor. I remember when they did that.

I'm thirty-five years old and dreaming of the job I got when I was 16/17, that I left in my mid-twenties. Things went so wrong for me. I wish that it could have been better. I wish I hadn't become sensitized to the materials so early on. That I didn't have those problems with my skin. That it hadn't gotten so bad they put me off work for 9 months. That I didn't have to wear those gloves every day, those stupid sleeves, the things that didn't save me after all.

I wish I could have been given a proper chance afterward, and not put into the Labour Market Re-Entry program which they took me out of for non-compliance. Non-compliance? I have always complied. I have always done the best I could in those situations. I always tried. I'm upset that was it. That was all. 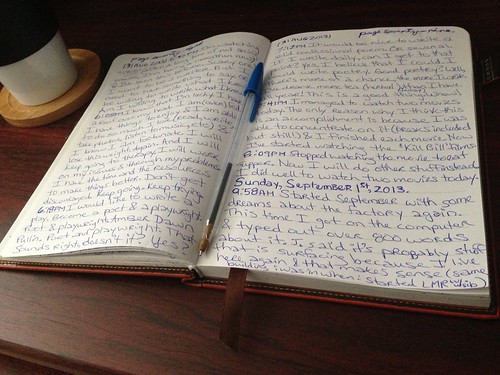 I've found it difficult to write and my paper journals have suffered for it. I've returned to writing but it's slow going and it's like I'm starting all over again. I've made progress since the 29th of August though, writing several pages, getting back into the habit of talking to myself with a pen again.

This morning I typed on the computer about dreams I had and managed over 800 words! Perhaps writing the mindless stuff in my paper journal is helping to move me forward? I'm not sure but I'm just happy to write, ya know?

Hopefully I'll be filling out postcards again soon, writing poems and able to make it through the rest of this paper journal (#34) before November. I really want to start a fresh journal for when I travel to Italy.

So, I'm writing worse than I did as a teen but honestly, I'm grateful to be writing anything at all.
Collapse