10:55pm - I'm starting today's attempt at the 750 words challenge with not much time for myself to meet the goal. One hour to make it when I don't even know what to write about! I also have a habit of backspacing and editing as I go along - not to mention how easily distracted I can be or how often I go do something else before returning to write. Not once since I began this challenge have I managed to finish a day without several wanderings to other places - both on the internet and wherever.

My photograph today was one that took effort and exposure to the weather. I went to a nearby bridge and set the camera on a branch. I took several timed continuous shots but I'm hardly visible in the photo. And I like that. Points to me for going outside, for meeting the requirement of taking a self portrait for the day, for not taking another myspace shot, right? I like to think that maybe I'll go outside again tomorrow and try taking another picture. I'll probably run away from the camera (as usual) but it'll have to do for now. 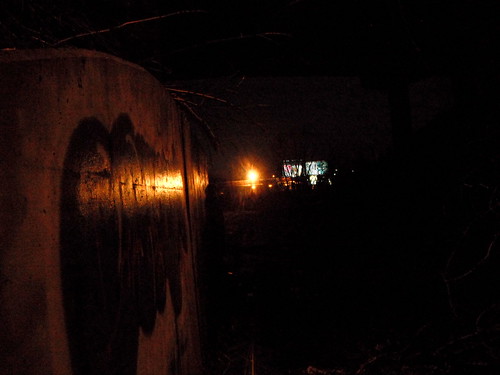 Had a bit of a 'Catfish' marathon today that involved watching the film followed up by a few episodes of the MTV series of the same title. I found it compelling because of my own experiences on the internet (I've been online off & on since 1998 so one sees a fair bit during that time, inevitably) and I thought about some people. There was one guy in particular who had myself and dozens of women fooled into believing that, not only were they his object of affection, but he managed to pull that off with such complexity and without conscience for quite some time before he was busted by a few of us who caught on, compared notes and collaborated in outing him. It'd be nice to say that it ended there but I last heard he'd taken it into real life and had become some sort of minister for some fake church or something? It was an entirely bizarre experience and man, did I feel stupid for believing anything he had said. Worse yet, he would take the music recommendations, the dreams and aspirations, the inspired ideas & goals of the various girls & women who thought they were his one & only and he would pass off those things as his own. It was even more complicated and intricate than I've briefly touched upon. When I think of all the energy, time and attention given to him by each one of us at the time, I am amazed at how it was possible for him to do such a thing. The older ones of us who fell for his elaborate lie felt the most foolish because, of course, it all seemed so ridiculously obvious once his lies were brought to light. I wasn't involved for but a few months but there were some who were in love with this man for a year or more. Imagine that. Imagine all that time? Unreal.

One good thing to come from that is that anytime I did venture into the world of online dating, I made sure to meet as soon as possible. Best to get it out of the way. If there was chemistry, a connection, any possibilities, what may be - we'd know. I'd be me and they could take me or leave me. Unfortunately, I probably let too much taking happen for a bit there but hey, I had a good time?

I can't hate on internet relationships because some of my closest friendships were formed online through various websites and have even out-lived some of those sites. Also, every one of my long-term relationships? I met them through the internet. I've also dated some fantastic men and met some interesting ones that made their impression. I've always been myself, for better or worse, and this has resulted in various outcomes with varying degrees of success, confusion and many moments of romance I will never have again.

People should always be themselves but I guess there is a time for many people where they haven't figured out who that is yet. Even when I thought I was secure in who I was, I didn't realize I was yet to change, to be altered by the course of my experiences in life. I guess what I'm saying is that mistakes will be made. People forget themselves. One person's expectations can come up against the wall of another's limitations and stalemates occur. I guess it should come down to being careful (but not too careful) and while you may expect to be disappointed now & then, allow yourself to be open to happy surprises, too.

If we let the wounds inflicted on us by a lover (or whose who mightn't been) to cut us down, we'll miss out on the love that is on their way, pulling the arrow from their own chest and moving forward, toward us.

Or somewhere near, ever-patient, that we may notice they've been here. 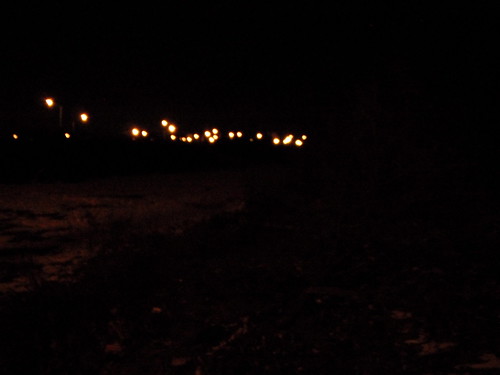