I abandoned this writing project mid-November during NaNoWriMo 2011. I was on target for word count and I certainly wrote more than I thought I would in comparison to previous attempts but I was all over the place, admittedly. (Though I thought that was a neat way to write it, a critique by a published author made me realize that I should probably try writing an actual story if I'm going to bother trying to write one?) Anyway, there is one excerpt I've held back on but that's only because it's far too revealing to share here just yet (I need WAAAY more distance from the circumstances / situation before I can openly blog/online journal about it) but other than that, here's the rest of what I had. I haven't given up writing but am focusing more on reading books these days - ingesting, learning, studying - and if I do try to write something other than a journal entry, I would like to try writing poems again. At least with a poem, I can reign myself in a bit more. Another thing I learned from the author who critiqued my writing sample is that not everyone knows what a desire line is - so here is a photograph with an explanation below it. The photo was from years ago when I lived in St. Thomas, Ontario - my hometown. 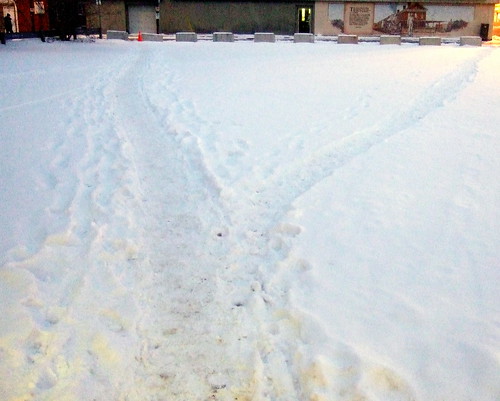 Notes: Desire lines (or natural desire lines, as they're also called) are those well-worn ribbons of dirt that you see cutting across a patch of grass, often with nearby sidewalks — particularly those that offer a less direct route — ignored. In winter, desire lines appear spontaneously as tramped down paths in the snow. I love that these paths are never perfectly straight. Instead, like a river, they meander this way and that, as if to prove that desire itself isn't linear and (literally, in this case) straightforward.

all of the above written by / sourced from: www.wordspy.com/words/desireline.asp

from: 'Memory Trails, Our Desire Lines'

"You make it difficult to love you," he said.

What could I say to that? It was true and I'd heard it before from another and no doubt I'll hear it again. Part of me will never allow myself to be happy or accept love or be good to myself for whatever damn reason and I'm not sure if that will ever change. That old time saying of how you should love yourself before you love anyone else, well, if I was to wait for that to happen before ever getting involved, I'd be alone forever.

Does that mean I should stop trying until I've learned how to love myself? That I shouldn't have a lover? That I shouldn't want someone to love me anyway? Need I be some ancient woman with an abundance of love and insight with a mushy heart but a dried up everything else?

The man who wants that doesn't have what I would need.

I don't place the burden on the other to love himself. In fact, I often find I'm with a man who secretly (or openly) loathes himself (and I sometimes discover, for good reason). So why put it all on me? Just take me as I am.

It's not supposed to be easy anyway.

My Twenties: The Pills I Swallowed.

I had overdosed on prescription medication to the point where I had lost muscle control. My body was a heavy sack of something and even more so with my loaded backpack on my shoulders. My insistence that I go home. I fell back onto the bed and he pulled me up again but I don't remember if he said anything.

Phoning the mental health crisis line for your local psych hospital when you're out of the country - all the way south in the States from your Southwestern Ontario town - well, it means there's not a lot they can say that will be of much help. Go to a hospital? As a Canadian, I had no insurance in the United States (just like most Americans).

I knew if I didn't leave him, if I didn't go, I'd just keep taking more until there was nothing left. This was already bad enough - for everyone. I felt awful for his elderly parents who drove us to the bus station, that they were seeing me like this, that I had done this, that their son was an asshole, but worse, that I seemed to be a crazy bitch.

Greyhound bus terminal in Tampa, Florida at midnight. There I was, in such a state that if I were to fall asleep I wouldn't wake up again. Critical. When I refused to stand at his request to hug him he said, "fuck you" and left. I blinked slow, disbelieving, looking down at my hands, the ones he tried to pull me up by. Goodbye?

Boarding the bus, I hit my shin on a step, hardly able to walk properly. Bruised, a deep cut, a scar for some time, the pain pumped much needed adrenalin into my sleepy system. I sat down beside a black man who offered me fresh fruit from a Tupperware container that his mother had packaged for his journey. He held my hand until we parted ways. Kept me awake talking about angels and god and living. I didn't mention my overdose but he must have known.

The strawberries tasted like every piece of cut fruit from the bowl.
Sweet and good.
That man probably saved my life.

I stopped believing in God when I was seventeen. Yet in the nearly three days it took to return home, I thought myself helped by Angels.

In the bus station where I was to be picked up and driven the rest of the way home, I pissed a little on the toilet seat and some on my jeans. It would be weeks before I could take medication again.

I had to get a lot out of my system.

Photographic Memories of Something Beautiful.

The woods on the first day of Autumn years ago that she took me to, a place where the light cast purple across green leaves, sunlight through everything, the bark of the two trees, the whisper of that space.

Tall stalks grown next to the village arena, across a grass field to one of corn. I only went there once in all the years I lived in that small town but that day I laid down to look up at the sky. I took my first digital camera with me and caught a cloud's smiling face.

Buildings hold onto history like books, like people, like desire trail traces of train tracks I waver walked when I was a girl. A women's college, abandoned, made for beautiful photos in the decades of decay burnt to ruin shortly after I moved away. I'm relieved after all that I wasn't there so that instead of the fire I remember the boy. Not more than ten, he said he was a security guard and that he could take me on an official tour. As he stood there on his bicycle I played along and took pictures of the structure, of the building from the outside while he made up ghost stories, remaking heritage with a tale from his mind made real as the burnt sunlight glare that made us shade our eyes with our hands at the same time to observe the high and empty ghostly windows that peered down - and it was there that I knew, in him, in that place and in me - the brilliance of a blazed memory trail.