I have agoraphobia. I'm a recluse. However, when I do manage to "get out there" I'm a social butterfly. I love people & places & things. I'd even go so far as to admit that I can be obnoxiously outgoing - when I manage to go out. It can be difficult to understand why someone wouldn't want to go outside - even more perplexing when you know they actually do want to get out there. Here's a list of understanding for both the outsiders and the insiders. (Which is which?)

1. prepare yourself.
Prepare yourself. You are going to battle. The battle is with yourself. The frontline? Your front door. Now, get rid of the sense of conflict, of war. Don't think too much about that door or even of what is beyond that but allow the idea of going through it to softly bounce around inside your head - against the yes & no. You want to get out there. There are things you want to see and do.

2. you deserve to go outside just as much as anybody else does.
Whatever reasons are holding you back - low self-esteem / body image, lack of money, other people's judgements - whatever stupid thing that you're telling yourself to keep from going outside - it's bulls**t. When you are out there and you're looking at everyone because you think they're looking at you (& let's face it, sometimes that's true) do you see that there are people of all sorts out & about? When you notice the people who are more attractive (by society's standards) do you also see people who aren't? Do you see that it doesn't matter? Do you see that just as they can't know what your story is just by looking at you, you don't know theirs either? Remember, "there will be greater and lesser persons than yourself." The likely situation is that you are not going to be scrutinized as harshly by others as you are by yourself. You must believe that you deserve to be in the sun - or under the stars - as much as anybody else.

3. bring your camera.
I often bring my digital camera along not only because I love taking photos but because the camera can be much like putting a filter between me & what is around me. (That can be a bad thing too but let's just say it's either this or a panic attack, okay?) When I'm taking photos, it makes it easier for me to be outside. It also goes to show I was actually out there!

4. bring your music player.
I live in Toronto and I think there are far too many of us with our mp3 players on - it's as though we don't want to hear anything going on around us or interact with anyone at all - but hey, this, again, is a great tool to help you get out of the house. Your favourite songs or podcasts can help your stride. It's probably one of the biggest bubbles you can put around yourself when getting from point A to point B (I don't recommend listening to your ipod when you get there if you're going to an event of some sort, unless that's part of it) and you'll fit right in with everyone else who has shut everyone out.

5. i say yes, you CAN take it with you.
When I'm especially panicked about going out, I may put together a survival kit. Depending on what I'll be doing, I add to it or leave things out. There are times when I take all of these things and use none of it.

Some of my suggestions:
* paper journal
Often, when I have it with me, I don't write in it but it helps to know it's there. You may substitute this for a sketchbook or something of that sort. It also can be good to sit somewhere with this and write about where you are, how you're feeling or avoid the subject altogether and just be doing something to distract yourself while you attempt to calm yourself about where you are. Also realize that if you're drinking lots of coffee at the same time then you'll have to write that much more to counter the now coffee-induced anxiety.
* netbook / laptop / etc
Another great tool to use out in public when you need something to put a bubble around you. I've sat in a cafe with my netbook and had strangers converse with me because of it. It isn't always about isolating yourself, see?
* a book (zine, newspaper, etc)
Whether you intend to read it or not, if you're a book lover, it's a good thing to have with you. Again, it's another way to escape what's going on around you but if this is what will help you get out that door, use it. Also, who knows - maybe you'll find a great place to read & write somewhere - outside for a change!
* favourite pocket-like thing
I've kept a stone that was given to me as a gift in my pocket to fiddle with, to remind myself that someone cares about me or that I'm going to be okay. Something like this can serve much like a talisman.

Personally, I add my ipod nano & digital camera to my survival kit, or a postcard received from a dear friend. Sometimes just one of these items will suffice in helping me out that door.

6. have a feature you like? nail it.
The last thing you want to do is draw attention to yourself. But if you feel like everyone is looking at you anyway, why not dress up? Paint your nails. Do something with your hair. Wear your favourite comfy jeans. Sunglasses especially help. Accessorize! Create a diversion or distraction from what you think people would be looking at with something else that makes you feel just a bit better about yourself. It's not about how you look - it's about how you feel.

7. once you're there, you'll be fine.
Usually, if you can just get past the fear & panic & awfulness of thinking of going / preparing to leave / being in transit / arriving, you'll be okay. Once you're there, you've done it. You've won the battle. Whether you can handle staying five minutes or the duration, the fact that you went is a very important thing. If you have to leave, don't feel bad. The main thing is that you went at all. You went outside your safety zone. You won. Try again. If you've stayed, well now - that wasn't so bad, was it?

8. don't think about it - just go.
As I wrote in a previous post: Taking a walk with a friend and appreciating where one lives is as good a way to spend an evening as anything, really. I didn't plan to do this but sometimes that can be an effective technique to getting out there - don't tell yourself you're going to and then when you least expect it... you're out the door! It's like sneaking up on yourself. Of course you've thought about it but then eventually, stop thinking about it. When I've done this, it's as though I've just gone into auto-pilot. I don't know how this happens and I wish it would more often because it sure feels better than the other way. (see #9)

9. have a friend / family member that won't PUSH you or say anything negative while you're freaking out / making excuses & in full out panic mode - who will be patient, won't get mad & will still go with you.
Supportive people in your life can make all the difference no matter what it is you're up against. It's difficult to understand why someone won't just go outside already! Even more difficult to comprehend when you've seen this same person be funny, outgoing, a delight when you've been out before. It seems so dumb - even to the person who deals with agoraphobia themselves. But it's about getting out there, right? The goal is to get out that door. However you have to do it, do it. It takes a special person to go through this with you but they know you're worth it and that you'll be out that door with them them once you've finished having your tantrum. The agoraphobe is fighting their own fears. If they're throwing a fit while at the same time gathering up their stuff - if they're at the door but stalling - they're probably going. Just let them get it out of their system. It sounds like such a waste of time, I know, but the real loss is when you don't have that time together outside.

10. don't stop believin' / hold on to that feeling (?)
Life is lived in the moment. A compilation of moments. Each time you manage to make it out that door and go somewhere - be with people, involve yourself in an activity - that is the great accomplishment for the agoraphobe - that is the moment. There will be setbacks. There will be time periods of isolation and frustration. Don't be so hard on yourself. Remember the good moments shared with others and of what more there can be if you just keep trying - if you let yourself believe. There is space for you out there under that great sky - and a world outside your door for you to live in, too.

I need to stop living as though I don't exist because the reality is, I'm here and this is my life whether I chose to participate or not. I want to live.
- goldmourn, 21 December 2004 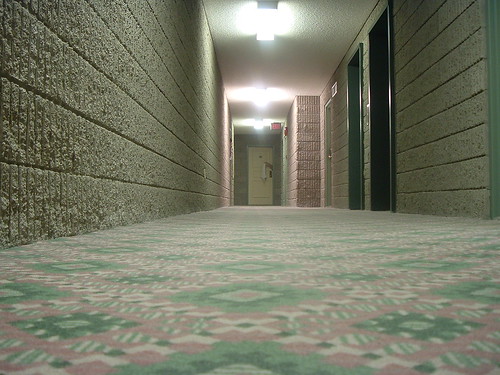