3 days
(including this one!)

There are really only 2 days left before I move from St. Thomas, Ontario to Toronto. Every box I had is packed and as I glance over, it doesn't look like much - not when compared to previous moves - which is a good thing. As it is, I've been feeling anxious about showing up at the new apartment and cluttering it. I hope I feel less self-conscious about it and more at home when the move is complete and things are unpacked, set right - when Cliff & I have had time to become reacquainted with one another after this recent absence.

Pretty flowers make most people feel happy.
I don't think this is the exact location where I picked up two bouquets of flowers but at least it's within the same area. Cliff's apartment was white with splashes of gorgeous color here & there and those blossoms just seemed to bring it all together. I hope I remember always his reaction when he returned home from work to see the flowers there - they could be seen from the doorway - oh, they smelled wonderful!

When I was heading back to the apartment with the flowers, there were at least three people who said to me as they went past that the bouquets were beautiful / lovely / gorgeous - the smiles that the flowers evoked before I even got them in the vase at Cliff's place made the anticipation of making him happy all the more. 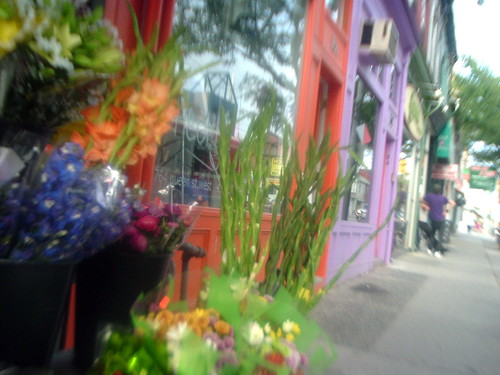 The map suit!
We passed by this window daily / nightly when we went anywhere and I was transfixed by it. I had to stop each & every time just to stare at the mappyness of it until finally Cliff got annoyed and had to push me on / drag me away. Why this suit? This window? This display? I love maps and globes and I suppose suits are alright too - so how could I not love this display? It stayed the same for a long while and Cliff said he thought of me when he'd go by it, when we were a part again, and then one day the shopkeeper changed the suit and Cliff forgot all about me. The end.

And then nine months later, Cliff and Amber moved in together. Yay! 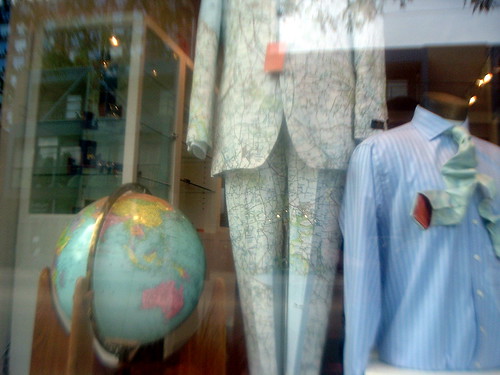 (05:50:25) awesome LJ friend: you know what I was just thinking? Moving is difficult, moving far is more difficult, moving as an agoraphobic person is fucking difficult.
(05:50:30) goldmourn: Yes.
It is.
You know, you're the first and only person to have realized that, or voiced it.
It has totally freaked my anxiety disorder out - not that i wasn't already bad before with the ongoing issues w/ my claim - but yeah, moving - I am generally (mentally) paralyzed practically from it.
I'm surprised I've done so much this time around - I have honestly packed all my boxes (need more) and done way more than I ever did before. It's not about doing, but the MOVING.
and I want to be in toronto with cliff more than anything.
(05:51:57) awesome LJ friend: When I moved from the (?) house, where I lived for 7 years, I was immobilized. (boyfriend - name omitted) and my mom did 99% of my packing
(05:52:05) goldmourn: so you can relate!
previous moves, my friends / family helped me / did it.
I couldn't. I was a wreck.
so you can relate.
(05:52:26) awesome LJ friend: exactly!
It's damn near impossible sometimes, and i"m proud of you for accomplishing so much
(05:53:01) goldmourn: yeah, an agoraphobic person is not good with seeing their prison taken a part, regardless of whether they didn't really want to be shut-in, it was a haven, of sorts.
thank you so much (awesome LJ friend).
the fact that you understand means a great deal to me. i haven't felt a lot of understanding coming my way, ya know?
(05:54:06) awesome LJ friend: Yeah I do know. And I realize that sometimes all we need is a little understanding in a world where it's rare, sadly. But yeah, I get it. :)
(05:54:16) goldmourn: whew!
because i've felt like no one knows how it's been for me this past while or why i'm still not jumping for joy even though it's the best thing to happen to me. i won't be okay until it's done, ya know?
(05:55:33) awesome LJ friend: Yeah, I know. Even moving from my mom's house to my own apt. was hard on me...but once the new place was set up I was golden
it's just a matter of getting through these last few days before you're settled

Here's the plan, as it stands so far:
-> Tomorrow, I've been told, Fred is going to show up to take away all of the stuff I've set aside for donating (& there's a lot!) including a bookcase, the huge desk that I'm currently using as my computer area AND he'll also be taking my futon mattress and bistro table set, since I won't be using them where I'm going.
-> Apparently more boxes will be dropped off which means I can hopefully pack whatever is left. I hope to be ready to go for the next day. This will be a first for me!
-> Likely I won't be totally ready though, so thankfully Dad & Laurel will be over early Saturday to help me finish up.
-> Saturday is the move. If I'm still not done, I'll be helped with the rest. I honestly do have less stuff than I've had in any previous uprooting & that is some consolation, though I'll still feel frantic until I am in Cliff's embrace.
Collapse