I was reluctant to post the 365 Days project photos in my journal too often and this is part of the reason(s) why. The official 'rules' and explanation of the project can be read on the flickr group page: http://www.flickr.com/groups/365days/ and it articulates the idea much better than I will.

For those who think my journal is just about self portraits (for those who think my journal is, um, all about me???) I wanted to clarify that on the 29th of December I began participating in a flickr project to take a photo of oneself every day for, well, 365 Days. Everyone has their own reasons for doing it and some of mine are: to learn self-acceptance, self-love, to try and see myself in a different / realistic / natural / somewhat more positive way. Another is to see if there are changes day to day or over a certain length of time (in various ways) and the other is so that I could hopefully use some creativity (terribly lacking lately, but it's still early in the year and hopefully that will change).

Then again, if you just want to think I should get over myself (as perhaps I well should, and so should you - and you and you and you) than that's okay, too.

(Overheard)
Person #1: I have white-out.
Person #2: S'alright... Sometimes you have to crumple paper and start all over.

edited to add: The first photo is of my friend Teresa, who I met through Ada. Tressa (seems to be the way we pronounce her name) went in with me on the impulsive act, getting her monroe done (though she'll be switching to a smaller ball) and it was good to share company with her for a time this afternoon. She even put up with me while I did my important banking stuff (received severence pay) and I feel relieved that I was able to take care of so many things that had been hanging over me, while at the same time spoil myself and others a little. My second period teacher let me out of class (because I wasn`t really there, if you know what I mean, after having not been able to go to the funeral...) and so I shared time with close friends instead. Getting out into the nice weather and distracting myself with the piercings & tattoo seemed a good idea to me - I can understand why some people really get into this sort of thing. Anyway, I was all over the place, mentally & emotionally speaking, and it was more obviously evident. Unrelated thought, being over in that part of the city today had me really looking forward to my upcoming move all the more. 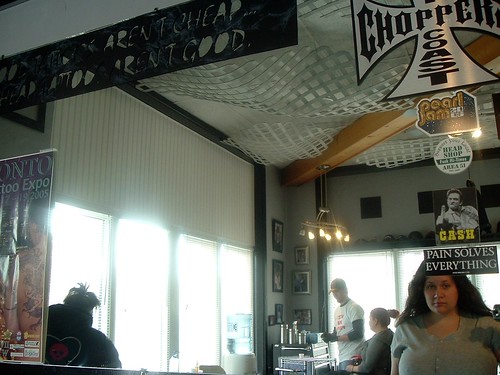