explorers of our time

Tuesday, February 24th, 2015.
10:44pm I'm watching some urban exploration videos on YouTube that are made by someone who lives in Ontario, Canada. (That's where I live!) Fascinating to see the places she has wandered into and taken vlog footage of and her thoughts about the places. So many of the abandoned farmhouses look like places I've likely passed by in the backseat of a car going along one of the rural highways from one small town headed to a city for shopping or appointments over the years. I would wonder about some of those places and now I'm seeing some of them, I'm sure of it, through these videos by TikiTrex. Worth checking out if you're not upset by the idea of someone trespassing. I've had an interest in urban exploration but my tendency not to go anywhere, well, that does get in the way of being an explorer, eh?

10:50pm It's obviously distracting to watch videos while trying to type my words for the day but I didn't want to stop watching. I have managed to move the browser for typing my words to the side of the video and it's fitting well enough that neither view is blocked. Thankful that the 750 words website is able to be used in this way because I'm still locked out of using the Semagic client on my netbook. I'll have to change my LJ password again and that is an inconvenience. Also, I can't remember which ones I've used where.

10:54pm Admittedly, I have thought about what adventures I might get up to when I go for bicycle rides out into the countryside. I've already said that I want to take a lot of photographs. The point will be to get in shape, to get fresh air, to take lots of photos, to (re)discover my hometown and to bike my way beyond it. I don't know how far I'll be able to wander in my first season of bicycle riding after so long a sedentary time but I'm hopeful that my partner & I will at least be able to cover a good expanse of surrounding area. I tend to push myself hard when I do get out and about like that. Example: the two bicycle rides I took last year. I mean, only two bicycle rides and I did fairly well all things considered.

11:02pm Maybe the headline for my online journal should be, "I am so distracted right now."

11:05pm I fasted for over two days and then I broke down. It's tough for me to get to the third day when husband is home from work. It's as though I need to get three days in minimum before I have the stamina to resist any cravings. This is why I've sometimes wished that I lived on my own or could go somewhere to be alone to get through a good number of days. I am usually only successful if I can get through the first few days without anyone that I can speak to about it. I know this sounds crazy but it just makes sense that of course it would be easier without having someone else around who doesn't have an issue with weight.

11:12pm I finished reading 'The Plague' by Albert Camus earlier this evening and what a relief it was to be done with it. I have to say the last few parts of the book were easier to get through then the majority of it. I finally gave up in trying to differentiate between characters in the book and focus on the rest of it instead when all of a sudden, I knew who was who and was less confused and then I was done the book. Well then! The exciting part was picking out which book to read next.

after reading a pulling teeth book: the excitement of which book to read next! the possibilities! the opportunities to delve into the new!

I still had to take my 365 Days self portrait for the day and wasn't too eager to do that, seeing as how I still need to have a bath and I'm not feeling well today. (Meaning: it's a bad body image day for me.) Lucky for me, I was ready to pick a book and decided to take my pic at the same time. 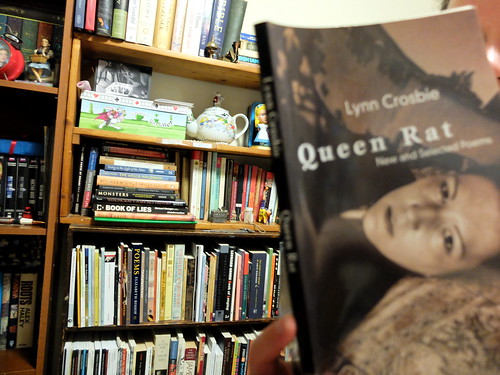 11:23pm I reached my word count goal but I feel like I cheated a bit because I put in some of the html for this entry already when I don't usually do that until I've typed my words for the day. This has inflated my word count so I'm going to keep rambling for a few more minutes since I have time.

11:25pm I really like these Urban Exploration videos. I noticed one of the comments by the urban explorer / vlogger where TikiTrex stated, "I never take anything." Kudos to her! That is very smart and respectful for her (if you aren't upset that she is entering these places in the first place) to mind the rule of not taking anything but leaving things as is for other urban explorers to discover for themselves or simply to be respectful of the place and what remains - either way, I thumbs up'd that comment reply she made to someone.

Also, if you're into the belief that some things / energies / whatnot can be left behind in places (or can be part of things and places) than you know it's best to leave things as they are and to disturb as little as possible.

11:30pm I'm going to wrap this post up and watch more videos. I love it that they're in my province, too. In the past year I have been slowly coming around to being okay about not living in The Big City anymore. Watching videos of someone who is getting out exploring the rural places that may or may not be in my area is another reminder to me that there is so much around for me to explore. I used to have a curious nature about me where I would go wandering through gullies and into the woods and find paths throughout places in this town - I could do that again.

The apartment is silent at this very moment as I finish typing this post. Except the tick tock of the clock I have in this room that doesn't keep time. I think it's suitable to me and my room of books.

A clock that doesn't keep time. It makes sense here.