Tuesday, March 4th, 2014.
9:42pm I'm tired tonight and I want to get to bed a lot earlier than I have recently but my 750 words haven't been written yet so it's another night of forcing myself to sit down at the keyboard to write. This would be easier for me if I would write in the mornings. I heard of this challenge via Twitter - #30DaysofWriting - and the originating site for that hashtag says one should write 1 - 3 hours in the morning after whatever necessary wake-up routine is out of the way. I'm thinking that might be a better way than rushing myself a half hour before midnight or going at this when I want to go to bed instead.

If you were curious, yes, I followed through in meeting up with the poet who graciously gave me well over an hour of his time in a coffee shop this afternoon. He had brought a printout of the poems I had sent him with physician-like notations scrawled beside my work. I'm thankful that he took the time to read it and I appreciated his insight. I completely understood where he was coming from with his critique and advice because I felt the same way about my writing. I know that I hold myself back in my poetry (I'm bloody terrified, truthfully, when it comes to writing poetry, of what will come out, of what I will reveal - but I love poetry and want to write it) and we went over what I had a grasp of and what I should work on.

A big thing is that I need to use concrete imagery. The best parts that he liked in my poems were the times where he "could see a lot of it" - the sensory detail and surprising imagery. It's something I rarely do but it would much improve my work if I would allow myself to "be more lyrical" and "translate statements into detail" - couldn't agree more. I "don't have to explain everything" and should "give the reader more credit" (and myself!) and "allow yourself to play with language" and "take raw emotion & translate for audience" - basically, I need to work on adding the sensory experience into my poetry. "Prepositions getting in the way" and I get "too concerned with meaning" and these aren't from his notations but what I jotted down in my notebook while he was talking to me. He thinks the concepts are there and I have a grasp of technique and craft with an idea of internal moments but I definitely should add imagery from my real life and put them into my poems.

The glosa I wrote was a solid piece of work that showed details and we agreed practicing different forms of poetry could be helpful in getting me to cut out the prepositions because the form is a good "container of thoughts" and helped me be more descriptive. I think it would help me experiment with language as well. I need to be bolder and braver in my poetry. Well, I have to be brave enough to write it in the first place. I am my worst critic and since I read so much poetry (literary mags, anthologies, poetry books galore) I am able to discern what is decent and what sucks - he could tell I was well-read in poetry - but advised that I think about what I like about the poems and poets that I like and learn from their example, basically.

Some of my stuff is "chopped up prose" (wouldn't that make a great title for a book of poetry, ha!) and I can be "fairly prosaic" but I can work on that with practice in forms, although some of my experimental lines and stream of consciousness-like stanzas with the feeling of immediacy worked in some of the poems he looked at - hoorah! It was a positive experience and he didn't have to tell me to "read more & write more" because I already know that part and it's what I'm doing (well, at least the "read more" part) and so it's a matter of allowing myself to delve into the sensory experience now. I know this has been lacking in my prose as well. I hold back or I make simple statements. This. This. This. When I could say so much more, even with less. Yes, it was a good meeting for me and again, I'm thankful that he gave me so much of his time and input.

cappuccino at Coffee Culture
Kudos to me for going outside & putting myself out there! 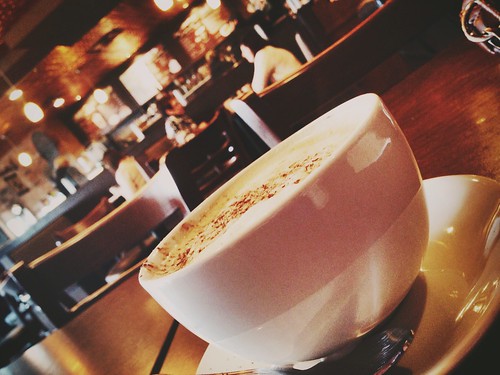 Blurb for back of book, should I ever possibly one day manage to become a published poet: "It's not Mary Oliver."
Tags: poetry & prose
Subscribe