There is no old age. There is, as there always was, just you.
- Carol Matthau

July 25th was my 32nd birthday. My 20-something year old self would be surprised that I'd be where I am today, let alone that I'd be alive. I decided to take a look back at some recent birthdays through a photograph taken on that day.

I was living on the 6th floor of Wellington Park Towers in St. Thomas, Ontario, Canada (hometown) across from the Elgin Mall. I had a large balcony and a great view of the sky. It was the first apartment I had after returning to my place of birth once I had escaped Glencoe, the place where I had lived and worked (in a factory) since the age of 17. I had won my WSIB claim and was relocated, placed in the L.M.R. (Labour Market Re-Entry) Program and felt hopeful after years of struggle & despair. 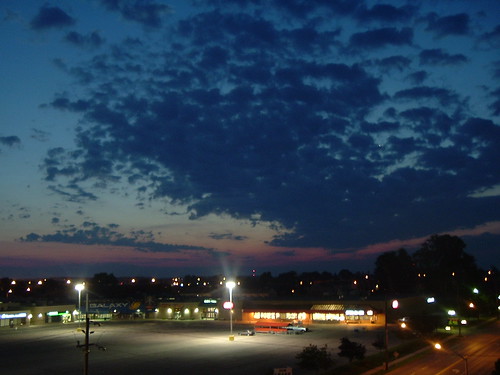 2007
The first time someone had ever made a birthday cake for me, that I could remember, at least in my adult years, and this memory moves me. I met Heather through a postcard community and we wrote one another for sometime before I had moved back to St. Thomas. I was living in my Pearl Street apartment at this time (I lived one year at the previous place and then moved after my lease was up, ending up 2 doors away from the house my Granny owned when I was little). After the cake, we embarked on a powerful adventure: I burned the letters. 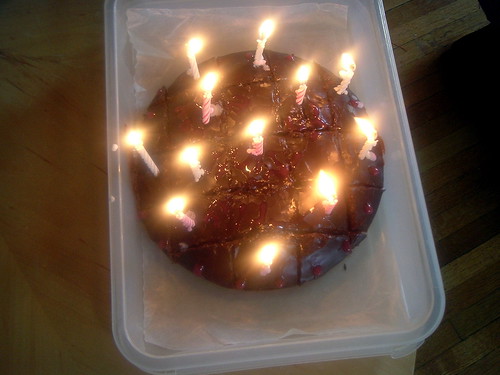 2008
"Thirty Years Old. I set the timer for this and put myself against a beautiful bright mural in the dark. I was alone when I took this photo.

Well, I made it. 30 years old. No cake this year but a brand new digital camera, which is awesome. Still, I was missing old friends. Facebook was nifty for receiving lots of wishes, though. One year, just for the hell of it, I'd like to have an actual birthday party where everyone is happy, gives me hugs & kisses, free drinks & oh yeah, lots of sexy dancing."

I had been living in Toronto just over 2 months. My heart was broken the eve of my birthday. We went for a walk with my new camera. When I took this photo, he was around the corner using his new iphone. I was devastated and unhappy and a terrible mess. I didn't know what I was going to do. I had left St. Thomas and made the big move to Toronto for him and it fell apart so quickly. (I had no idea it'd be another year before we were finished). 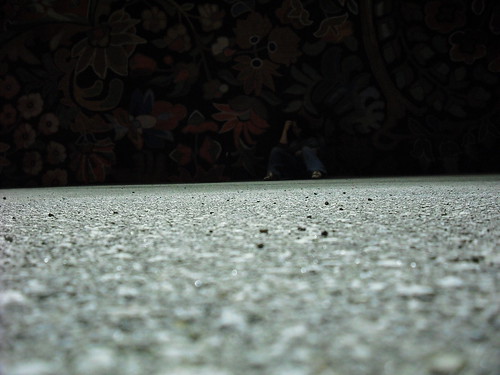 2009
"the chair goes with all the woodsy mismatched furniture stuff i have. i got the chair for free on my birthday - someone had just put it to the curb."

Last year on my birthday. Ah, see my tribute to Michael Jackson? Things have been rearranged much differently since then but I still have the chair, though I usually sit in my cozy chair that I bought with my tax refund this year. This photo was taken in my bachelor apartment at the Beach/es in Toronto, where I still live now. I've mentioned numerous times how lucky I feel to be where I am. Looking back over the years, even a year before this, I never would have guessed where I'd be. It's a wonder to still be here. 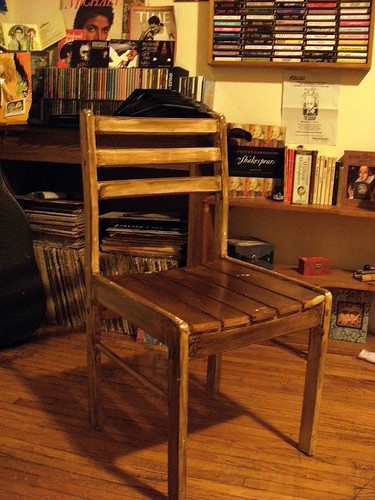 2010
No photos, save for this darkish twitpic of one of the presents Tallman gave me (photo taken on the 24th but it was delayed in being posted by TwitPic). This year, I'm still in The Beach/es (as I repeatedly mention) and I'm in the same apartment. But if looking back simply by the milestones of my birthday tells me anything, it speaks to me of how things can change, of how much can move on & away (friends, relationships, money --- even myself), the way that love flows in & out of my life & various expressions of it, what I've lost & gained (not just talking about my weight) and of the impermanent nature of it all.

At this time, I'm registered once again at George Brown College in Toronto. My two beautiful fat & fluffy cats are with me. I'm not just sharing a space but sharing my self with someone who loves me. My finances suck and my claim(s) continue to drag on but I'm not in limbo because of them - they are side notes for me. Each year noted above had highlights of good times as well has hardships and heartache. I suppose that's how life is, eh?

I received a birthday card from my friend Carol last year that read: 'the year stretches out before you, shining with promise' and I've had it on my wall for quite sometime. Inside the card, she wrote:

And. BE GOOD TO YOURSELF.

The message remains relevant whatever age I've been or will be - the striving to try to follow that advice continues to be the struggle.
Tags: year in review
Subscribe

Recent Posts from This Journal